Heterosexual and male same-sex couples who are referred to a specialist doctor for help with trying for a family will typically find that the first step taken is to look at the man’s general and fertility health.

The general health check involves looking at body mass index (BMI), blood pressure, cholesterol levels, medical history and lifestyle. The lifestyle checks are wide ranging and may include whether the man is a heavy smoker, regular cannabis user, drinks alcohol, takes any medication on a regular basis, or other factors* which may impact his fertility.

*Men who work in hot, stressful or physically demanding environments are more likely to encounter fertility issues. For example, famous chef Gordon Ramsay has previously spoken about how working in hot kitchens affected his sperm count.

Specific fertility checks include semen analysis and testing for chlamydia, a common sexually-transmitted bacterial infection which left untreated can affect fertility. Tests may also include full hormone analysis if hormone problems are suspected.

We take a closer look at some of the terminology your specialist may use when you go in for a fertility health check:

Semen refers to the mixture of sperm and the secretions, or fluid, that contains the sperm. These secretions contain natural chemicals such as glucose, calcium and magnesium – which are vital to “fuelling” the sperm so it survives long enough after ejaculation (discharge from the penis) to fertilise an egg.

Semen analysis is a simple - but important - test for male fertility. You’ll be asked by your clinic to provide a semen sample. This is then analysed to assess the quality of the sperm sample. The criteria your semen is assessed against is shown below.

A semen test analyses the total volume of a semen in an ejaculation sample.

Normally, semen volume is between 1.5 – 5 millilitres. If the semen volume is too low, it may not contain enough sperm, or there may not be enough secretion to nourish and help transport sperm to a woman’s egg.

Sperm count (sometimes referred to as sperm concentration) measures the number of sperm in each millilitre of semen. A low sperm count may mean you will have trouble conceiving.

Sperm are programmed to swim to reach the egg released into the Fallopian tube during ovulation.

A motility test measure how active and “lively” the sperm is and whether it is following a good path to reach its “egg target”. If the sperm has poor motility, it is less able to swim towards the egg to fertilise it. If the motility rate is below 40% (i.e. less than 40 out of 100 sperm) are moving actively and in the right direction, this would suggest a male fertility issue.

The size and shape of the sperm – or its morphology - will have a bearing on fertility. Sperm which has an abnormal shape, may struggle to reach the egg (e.g. they may be less able to travel in a straight path and may move in circles instead), or will find penetration of the egg more difficult.

A morphology test examines the shape and size of sperm and specifically will look for the percentage of normal sperm in a semen sample. A morphology rate below 4% - i.e. where only 4 in 100 sperm on average look normal - would suggest a male fertility issue. 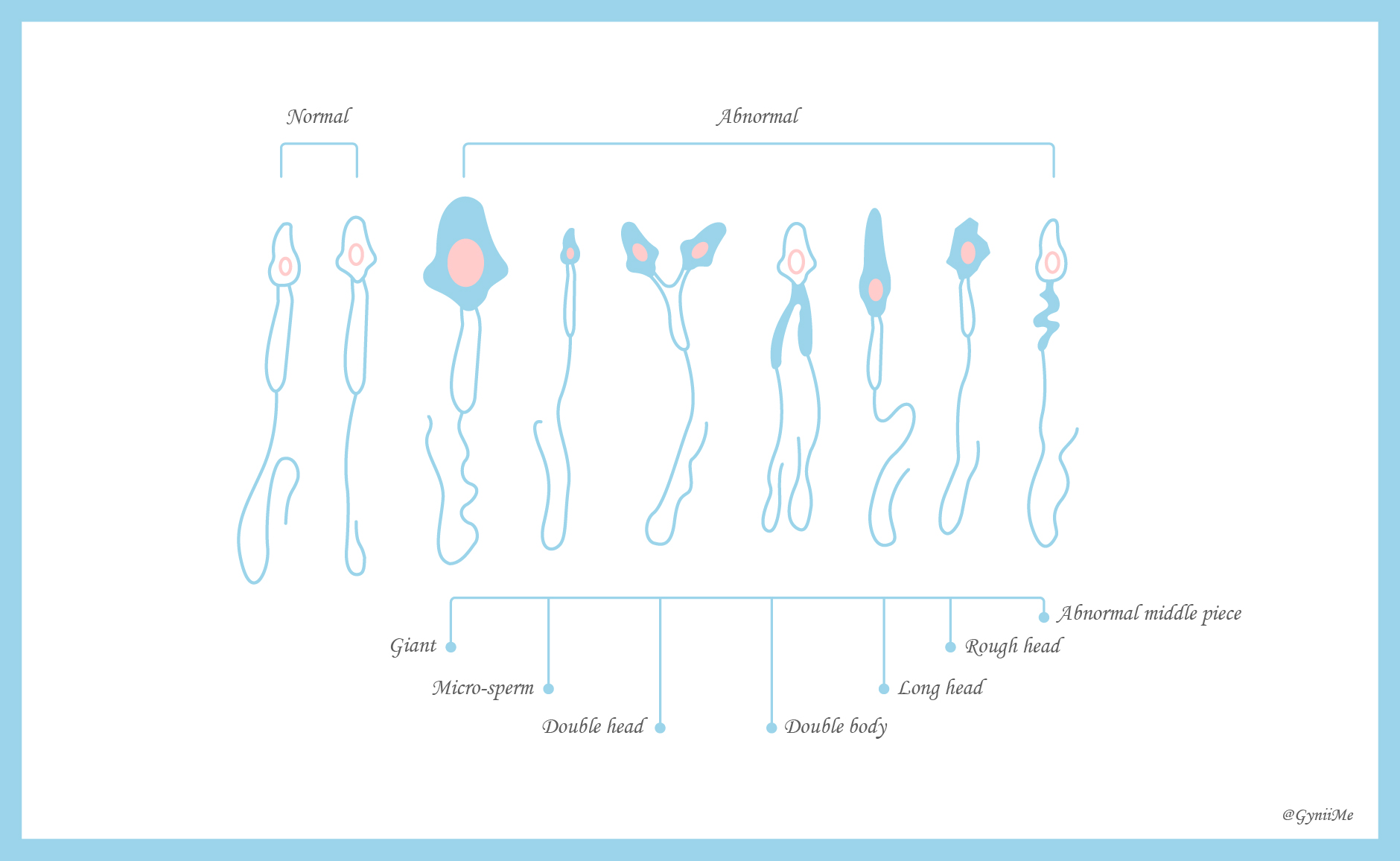 Want to find out more about your fertility health?

If you suspect male fertility could be a factor in your situation, it’s worth booking an appointment with your GP as soon as you can. Once they’ve done an initial examination, your GP may want to refer you to a specialist – at this point, you can request a referral for a specialist of your choice. Our helpful search tool (click here) helps you find a male infertility specialist near you, and you may even benefit from a discount when you book an initial consultation through our website.

Simply type in your town or postcode (1), select “Male infertility” from the specialist areas drop-down (2) and click the search button (3).

Gynii Me is a UK based company dedicated to supporting individuals and couples throughout their fertility journey.

We are committed to helping you, no matter what your situation or background, to understand your options and make the right decisions at each stage of your journey in starting a family.

Our ultimate goal is to make fertility treatments accessible, affordable and transparent.